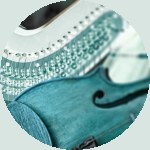 Popular selections is the first album from The Kistemakers and contains some of the most popular pieces they perform. This album is available from the music store on this site as a CD or digital download. It is also available as a digital download from some of the most popular digital music stores (including itunes and google play) and is available for streaming on multiple platforms (including spotify and pandora).

The Kistemakers is a duo consisting of the sisters Emily and Daniella Kistemaker who have been performing as a violin and harp duo for many years. They often perform together at weddings and other events. In 2010 they were chosen to be one of the forty under forty by the Guelph Mercury. They have been members of the Kichener-Waterloo youth Orchestra for many years (until they started university) and they both have won the concerto competition (in  different years) which enabled them to perform as a soloist with the orchestra. They both have won numerous awards at local and provincial compertitions, are winners of the grade ten provincials, and hold an ARCT for their instrument.

Daniella is currently studying business and science at the University of Waterloo (Waterloo, Ontario) which she started in 2017. She started her harp studies with Robyn McLaren when she was 7 years old but she has been taught for many years by Marie Lorcini and Sharlene Wallace. She completed her ARCT for harp in August 2017. She also studied the piano with Tracey Clarke-Rankine. She enjoys improvisation and composing music.

Emily is currently studying music with a major in Violin at Wilfrid Laurier University (Waterloo, Ontario) which she started in 2016. She has been playing the violin since she was three years old. She has studied with several teachers including Joan Barrett, David Zafer and Atis Bankas and she currently studies with Jerzy Kaplanek. In August 2016 she completed her ARCT for violin. She has also studied the piano with Gail Lange since she was four years old and she completed her ARCT for piano in June 2016.